A Registrar’s Job Is beyond Admitting Students 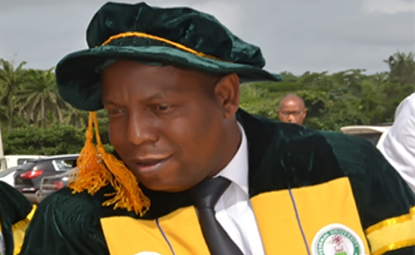 The Innovate! Will ever do all it can to enlighten its readers on those issues that are considered gray. So in our chat with FUOYE’s Acting Registrar, Mr. Daniel Adeyemo, the university head of administration opens up on salient issues bothering on his Department. The Registrar spoke to Innovate! crew recently.

Sir, we are here to talk about pertinent issues in your department. In summary, what is the sum total of the job of a university registry, i.e. its core functions or charges?
This question will take us back to when university education started. A university in a lay mans language is a community of students and their masters. It was a kind of isolated environment from the general public for people who wished to acquire knowledge. But as students and their masters grew in number, the institution became complex and they began to need facilitators and clerks who would help them manage the institution and provide basic things to help them perform their assignments.
Now, you can begin to understand that the function of the registry is to provide administrative service so that researchers and lecturers do not have to leave the laboratories and classrooms to do works like registering students, managing, accommodating them and seeing to their welfare, as well as circulating information. In short, the registry is there to offer relief to the academic unit of the university.

What are the sub departments in the Registry and what are their oversight functions?
It depends on the setting, but basically the sub departments of the registry include the Office of the Registrar, the Personnel or Human Relations Unit, the Academic Affairs Unit, the Council Affairs and the Students Affairs. The Registry is like a clearing house and the Registrar performs oversight functions and provides assistance to the Vice Chancellor on the day-to-day administration of academic and administrative matters of the university and in policy formulation. The Personnel oversees the promotion, discipline and welfare of staff. The Academic Unit handles university senate matters and things relating to the university calendar including student admission, examinations and records. The Council Affairs Unit offers supporting services to the Registrar who is the Secretary of Council and shoulders the responsibility of the Governing Council in its oversight functions of local administration and issues of the University.

This being a new university, do you notice any peculiar problems in the Registry?
Of course, there are peculiar challenges. There are places where things had been established and organs run by themselves. But with a new university where everything begins from the scratch, there are challenges. A lot of funding is required and education funding is at its lowest ebb; especially with a university born out of necessity. This necessity arose as the Federal Government saw the need to establish universities to provide opportunity to educate the teeming number of young people in need of higher education. For instance, about 1 .7m young people were, last year alone, seeking admission into the existing universities.  And the number keeps increasing every year. So it is a challenge which the government must face headlong and find a solution to. Therefore, the challenge is that funding is grossly inadequate. Again, when you have to assemble people to start a new university, there is the challenge of not getting the right people. Except for the giant move now being made by the Vice Chancellor, some of our programmes stand the risk of not being accredited because of lack of facilities. Then there is the problem of community unrest. Instead of supporting the university, the host communities are creating tension with their never-ending conflicts between each other.
Because the communities are not friendlily disposed, the university did not start until eight months after the Federal Government approved it.
However it has out-paced its contemporaries in infrastructural development.
Being a young university, many young persons have come in as staff and being pioneer staff will need some training in university administration.

How do you intend to handle this?
I am personally involved in training these people. Like you rightly observed, all of them are fresh people but l think God has given me the grace to bring them up. Some of them will be attending a workshop at Ekiti State University soon. Some time ago, some of the staff attended a conference at Ibadan, and last year, some of them were at Federal University of Technology, Akure. There are financial constraints, though, as things improve, more will benefit.
How do you manage a multi-cultural / multi- ethnic work force such as you have? How do you ensure there is harmony among them?

An organization cannot grow above the visions of its management. I leant from the bible that followership depend on the focus of the leader.
Going through the book of Kings, Israel did well if they had a righteous and focused king, but failed as a nation when they had a wicked king. On that note, if the leadership is tribalistic, the followers will also tend towards that sentiment. The pioneer Vice Chancellor of this university, Prof. Nebo, had a focus to assemble people who have the mind to work together. He would never allow tribalism and some of us are trying to take after him in that regard. A hardworking directional leader must be focused, though some people might work against him. I respect Prof. Asuzu. His verbal denunciation of tribalism in this institution is often backed up with visible actions. That is how it has to be.
Recently, I had to do some reshuffling in the Registry, and had to move my own brother.
When people see that you are not straightforward, they come to you bringing every manner of request laced with ethnic sentiments which they expect you to act upon.

The work force learns from you. Who do you learn from?
I have a mentor and we worked together for a long time. He is the former Registrar of Obafemi Awolowo University, Ile-Ife, Mr. Ogunruku. I respect him because its from him I learnt much of what I know today. Though I have other role models, his impact on me is great. There is also Prof. Nebo.
He is an experienced university administrator. He is courageous and you can’t intimidate him. I learnt from him to be courageous and not to be intimidated.

Talks are going round within the university community about allowances such as relocation, hazard and other allowances. When will FUOYE pay some of these?
You see, most of the allowances people ask for these days have been consolidated into the salary. That is why we have the consolidated salary. The 28-days allowance is supposed to take care of a newly posted or recruited staff’s accommodation until he settles down, more so if his new place of work is far from his former place of residence. Some of these things are not built into the personnel grant, which is meant to service only the overhead expenses of the university. ThE other day, I heard the Vice Chancellor say that the university receives seven million naira per annum. Travelling, maintenance of the campuses and vehicles, and other overhead expenses all come from that money. And remember, were just starting from zero. A vice chancellor without courage would run away from this mountain of problems. I admire Prof.
Nebo because instead of running away, he faced it squarely and surmounted it.

Having been on this seat for these two years, what has been your greatest challenge and how have you been able to overcome it?
You find challenges everywhere. As in all places especially in this plural community, you find malicious and often, sentimental opposition. My General Superintendent in the church once said,

You can only face a direction in the world at a time. This means that the people who are behind you at any point may feel neglected and therefore become unhappy with you. So, one ought to be careful in handling these things properly. If not, you can kill the system. Funnily, though, people who oppose you today may become your friends in future. So, since you have to deal with people anyway, disregard the oppositions as distractions and forge ahead, with God as your helper.’

A couple of units complain of overlap of functions. What is your advice in this regard?
I am not aware of such overlaps because we have a schedule of duty that defined these things. However, part of the documentation going on now is to ensure that people really know their roles. Again, Ithink that people are only trying to work to get the university where we all desire. If God endows you to do my work, and it adds up to project a good image of FUOYE outside, then the credit goes to FUOYE, not to you nor to me. Nevertheless, what I’ve seen is people abandoning their core assignments in pursuit of what’s not really their duty and then their job suffers.

As a Registrar, are you modeling the university after an existing institution or do you intend to carve out your own unique model?
We’re not working to take after existing universities because they are already doing well in their fields. We want to add value; carve a niche for ourselves. While they offer a preponderance of courses in the academic area, we want to add entrepreneurial skill. That will make us different. However, the other universities serve as a spring board. We are standing on their shoulders so that
we can see farther ahead.

How would you advice an up coming Registrar on the intricacies of the post?
am also up coming because we’re all learning on the job. However, the opportunities and interactions are there. Sometimes, you wonder whether the job is enviable after all. Just be courageous, be focused, prepare for the challenges and you will get by.

What in your upbringing spurred you on to succeed?
I have a very poor background. I grew up in Aramoko; a poor boy in a poor village. lam the first of seven children and there was nothing special about my upbringing. I was just like everyone else in the village. However, I was quick to notice when I was very young that nothing besides the grace of God could lift me up from the squalor and human degradation occasioned by poverty. Knowing that there were no big uncles or brothers or other such benefactors to lean on, I came to develop a sense of independence and hard work. I never even thought of getting help from anyihere. For instance, in all my school years, I was never involved in examination malpractice; I learnt early to depend on my own inner strength. God has also endowed me with resilience and determination; qualities that have helped me in my dogged struggle to change my lot. I came into university administration in 1996 and Adeyemo is household name in Federal University of Technology, Akure. Being a poor boy from the village, I have really come a long way but I know that God has helped me.