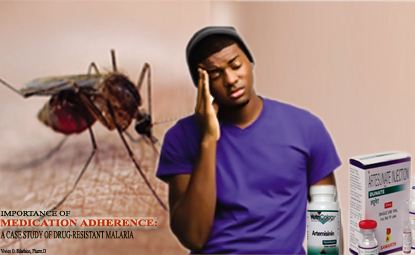 Mr . Mann falls ill with malaria. He visits his healthcare professional and is given anti-malarial drugs with the appropriate advice on how to use the drugs for three days. He goes home and takes his drugs as instructed the first day. However, on the second day he takes the morning dose and by midday actually feeling much better, decides to stop taking the drugs altogether.

Two weeks later, he begins to feel ill again and returns to his doctor who, because there are not many drugs currently available for the treatment of malaria, prescribes the same drugs for him again with the same instructions. He obtains the drugs from the Pharmacy, goes home and, as at the first, takes his drugs as instructed on the first day. The second day he feels stronger and again dumps his drug.

A week later, he falls really ill. Frustrated, he returns to the clinic, He arrives at the doctor’s office, sits before him and complains, the drugs you prescribed for me did not work, I am sick again after only one week. Twice I have treated malaria but I do not seem to get better. There are too many mosquitoes in this country. There are too many fake drugs in Nigeria. In fact, I am sure that the drug I bought at that pharmacy store is a counterfeit”,,,, And on and on he whines.

Many persons, unarguably, will identify with the above scenario; they continue to fall ill with malaria every now and again, and treatment with drugs seems to provide only transient relief.

But why is malaria therapy not as effective as it should be? Why do individuals keep coming down with this worrisome ailment even after repeated treatment and seemingly successful protection from the malaria parasite-bearing mosquitoes with the use of insecticide treated mosquito nets?

Understanding the workings of the malaria parasite in the human body might be of some help.
Mr. Mann, introduced at the outset, was infected with the malaria parasite called plasmodium through a mosquito bite. This parasite multiplied rapidly and began to overpower his body’s defence system, causing fever, fatigue, loss of appetite, aches and pains, etcetera; He came down with malaria as a consequence. He was given the right anti-malarial drugs, genuine and effective, but he did not follow the prescription. The healthcare professionals played their roles, but Mr. Mann did not, in the healing process. Healing takes a combined effort; it takes the concerted cooperation of both the patient and the care-giver to make it possible.

Unknown to Mr. Mann, the malaria was not gone in spite of the fact that he felt physically better. The malaria- causing parasite, Plasmodium, was only “lying low”. The concentration of the drugs taken for two days had initially killed off some of the weaker parasites, but merely knocked off the stronger ones into an unconscious state. Taking the prescribed drugs as recommended for three days would have provided enough concentration to completely wipe out the parasites. Alas, Mr. Mann, not knowing this, decided to stop taking his medication the moment he began to feel well. This he did the first and second time.

Mr. Mann, by not taking his drugs as instructed, unwittingly caused the malaria parasite in his body to develop resistance to the drug. Sadly, the story does not end with Mr. Mann: Because he lives in an environment favourable to mosquitoes, he is in no time bitten by another mosquito which, in the process of feeding upon his blood, inadvertently sucks up some of the drug-resistan Plasmodium.

This same mosquito eventually feeds on another persons blood and, because there is love in sharing, drops off some of the drug-resistant plasmodium into his victims bloodstream. This new person, thus infected with drug-resistant Plasmodium, falls ill with malaria, gets treated with the best drugs available, but does not get better. As it is with the malaria parasite, so it is with every other disease-causing microbe; bacteria, virus and protozoa alike. This is the reason for increased resistance to antibiotics: It is the reason Chloroquine, a once glorious anti-malarial drug, lost all its appeal and has been kicked out of the palace into the streets to beg for patrons. Most malaria cases, with the exception of quite a few, no longer respond to treatment with Chloroquine. Fortunately, just about when Chloroquine virtually stopped working, another antimalarial drug was under development, and eventually came to the rescue.

Artemisinin-based combination therapy (ACT) took over from Chloroquine and is widely in use today. In fact the Nigerian government, under the Roll Back Malaria (RBM) programme, has been shouldering the financial cost of some of these drugs so that they are made available to the populace, free of charge.
Artemether, Artesunate,
Artemether/Lumefantrine,
Artesunate/Amodiaquine,
Lonart®, Coartem®,
Amatem®, Artequine®
so many names abound.
These drugs are the mainstay of malaria treatment today.

ONE YEAR IN OFFICE CELEBRATION: SNIPPETS FROM VC’S ADDRESS AT THE PRESS CONFERENCE