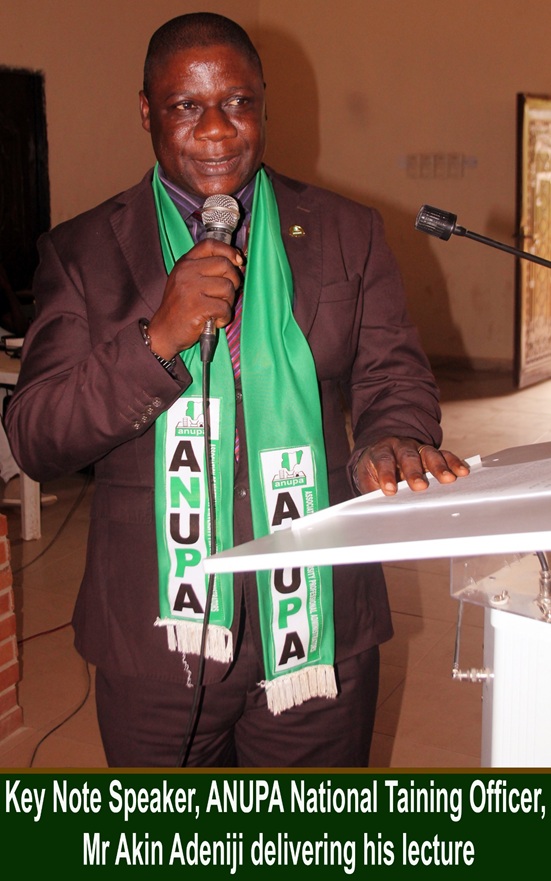 The above headline was the exact title of a lecture delivered by the former Deputy Registrar, Ekiti State University (EKSU), and National Training Officer, Mr. Akin Adeniji, on the occasion of the first quarter lecture and luncheon of the Association of Nigerian Universities Professional Administrators (ANUPA), FUOYE Chapter, held on Friday 08 February, 2019 at the faculty of science new lecture theatre.

Presenting his paper, Mr. Adeniji gave insights into what culture entailed as not just mere customs, ethics or value as perceived by many, but involved an aggregate of belief system, norms, cumulative deposit of knowledge, experiences, attitudes, notions of time, religion, hierarchies by which a society is known and in turn, passed along by communication and imitation from one generation to another. He also stressed the need for administrators to realize that they are like lubricants that drives the engine system of the university forward.He further interrelated the basic concepts of University Culture, Academic Freedom, Academic Culture and Organisational Culture.

According to him, university culture are those set of shared attitudes, values and practices that characterized an institution stressing that each university must be identified by her unique and cherished culture. Thus, the rhetorical question, “What is FUOYE known for”? “A university’s culture, tradition and values are not only important but also unequivocally vital to the wellbeing of the institution because they provide stability and continuity. Certain university’s culture must adapt to meet certain changes”, he said. An assertion that led credence to the belief that a  university could be likened to that of a living organism that grows at certain times, adding new academic programs, constructing new buildings and hiring new personnel but at other times, forced to modify her focus by shedding obsolete policies, outdated curricula and adjusting short term goals.

Academic Freedom, Academic Culture and Organisational culture were some of the key concepts equally identified by Mr. Adeniji. He revealed that best university practices allow for free-flowing of academic debate that may or may not necessarily be tied to the individual’s disciplinary interests. He opined that learning practices should involve cross fertilization of ideas among students and also between academic staff and students adding that the option of asking open questions (and not just close-ended questions) should be allowed without fear of reprisals. He, however maintained that such practices of academic freedom vested on the students should equally be guided. Oragnisational or university culture simply refers to the university’s expectations, philosophy, experiences, and values that guide member behavior and expressed in member image, inner workings, interaction with outside world. Every university has her unique identified culture which matures overtime and which students learn to fit into the university environment. While Academic Culture of a given University consists of academic outlooks, spirits, ethics and environments. Some elements of academic culture are inherent in the ethos of the profession while others depend on the organisation of work determined by the University.

An underlying vital aspects of his presentation was the identification of the five main types of university administrators which according to him are the keepers of the traditions and protectors of the history and culture of any established university. They include; 1) Policy Administrators who make up the decision making body of the institution. They are referred to as Principal Officers, members of Council and Senate. 2) Academic Administrators are Deans, Provosts and Academic Directors who perform daily administrative duties. 3) Academics in Administration are referred to Professors and other academics who are deployed to run the committee system of the university as either chairman or member of a committee where operational decisions are taken from time to time. 4) Professionals in Administration are core professionals such as doctors, engineers, system analysts, auditors, architects, and accountants etc. who serve as heads of departments or units and who in turn perform specific administrative duties. 5) Professional/Career Administrators those who administer and facilitate the day to day operation of the university. They can also serve as secretaries to committees. Each group of administrators must learn to identify and work with one another in order to achieve the corporate university objectives, he said.

Mr. Adeniji also highlighted some of the features of University Culture as it relates to the roles of Professional Administrators which include; Relationship between staff and students, dress codes, pecking order, inaugural lecture, congregation, students unrest, plagiarism, academic misconduct, course materials and false Information and representation, fabrication or alteration of information etc. Globalization and cultural blend, ever changing technologies, ICT trends, Monitoring, Evaluation and Mentorship were identified as some of the bedeviling factors affecting university administrators. He finally posited that administrators must understand the changing dynamics of a university system and strive to ensure that the university continues to move forward without discarding its strategic plans, goals and metric of performances that had become critical to the university’s successes.

The event earlier had the presence of principal officers (Vice Chancellor, Prof. Kayode Soremekun represented by Director, Academic Planning Unit, Prof. Mrs. Cecelia Akintayo, Ag.Registrar, Mrs. Olayinka Adeniran-Ajayi, Ag. Bursar, Mrs. Bolanle Akande, Dean, Faculty of Arts,) who graced the occasion. While making her brief remarks, Prof. Cecelia Akintayo expressed elation and praise to the organisers of the event while reiterating Management’s resolve to constantly training their workforce adding that such exposure to periodic training would help improve the optimum efficiency of that worker. She also stressed the need to identifying the various categories of Administrators and enjoined staff to embrace the scope of the duties of each group of administrators, thus ensuring who does what specific duties in a university system. She also implored participants to field questions bordering on new trends and frontiers involved in discharging their core responsibilities.

Ag. Registrar, Mrs. O.A. Ajayi likened the university administrators to that of occupying the neck position of an organization. In her views, the neck is equally an important part of the human body just as the head since it is perceived as the sole carrier of the human head. That automatically means that administrators had been positioned as co-drivers of a university system. The success or failure of one would lead to a total collapse of the other. She equally decried peculiar challenges associated with young growing universities but however, maintained that any university with a strong resolve to keep driving within the limits of resources at her disposal would eventually reach its enviable heights some day.

ONE YEAR IN OFFICE CELEBRATION: SNIPPETS FROM VC’S ADDRESS AT THE PRESS CONFERENCE